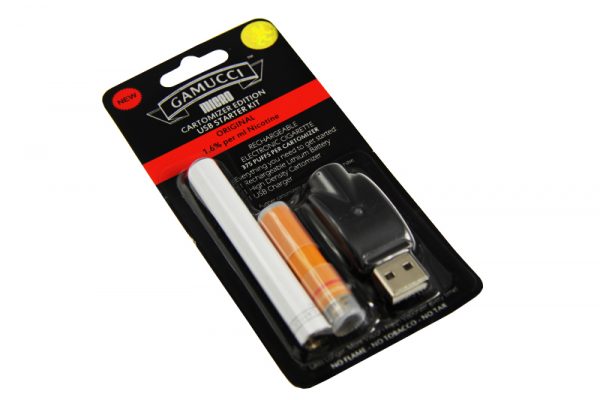 I smoked for roughly fifteen years before I decided that I wanted to quit to try to better my health. Quitting smoking cold turkey felt nearly impossible to do, however, so I wanted to see if vaping was right for me.

Many of the vapors that I saw seemed to be a bit more complicated than I wanted them to be and a lot costlier too. After searching around, I decided to try the Gamucci E-Cigarette because it was affordable and easy to use.

The Pros and Cons of the Gamucci E-Cigarette’s Look

The exterior of the Gamucci e-cigarette is designed to look very similar to a normal cigarette. I did find that it felt a bit longer than a regular one. When vaping with the Gamucci, the end has an LED light on it that lights up. It would look more authentic if the light had a red color to it when it was lit, but mine has a green color which makes it look odd when I use it.

The Gamucci Is Simple to Use

I love the fact that this e-cigarette was so easy to use. Some of the vape starter kits I saw available for purchase seemed to have tons of parts and made me nervous that I would do something wrong and break it before I even got to use it.

The Gamucci ended up being great because I didn’t have to worry about filling it with vape juice or worry about charging it. All I had to do was open the packaging, remove the protective stickers over the holes that the vape comes out of, and use it. The battery lasted a little more than a day and a half, so I was able to get plenty of use out of it before the battery died.

Using the Gamucci Was Different Than I Expected

When I first bought the e-cigarette, I didn’t know what to expect. I had heard different things and was worried that the vape was going to be too harsh or not harsh enough to make it feel authentic. I was pleasantly surprised with the vapor that came out of the Gamucci; it wasn’t too harsh and had a great tobacco flavor. I did have to pull quite a bit when inhaling though, and the packaging claims that you can get up to 400 inhalations from the e-cigarette, but I feel like you really only get about 250 to 300 good strong puffs from it.

The Gamucci Is a Good Overall Investment

I liked the fact that the Gamucci was so inexpensive because I was able to take it with me into clubs and not worry about damaging it or losing it; the affordable price and compact size of the e-cigarette made it great for use on the go. I did feel a little embarrassed when using it at first because it was obvious it wasn’t a real cigarette, but once I saw a few people vaping the insecurity disappeared.

I found this to be a great way to introduce myself to vaping without having to invest in an expensive vape starter kit. I was able to dramatically cut back on the number of cigarettes that I smoked on a daily basis and did eventually quit smoking altogether. Overall, it was a great investment that I made to recommend to everyone.