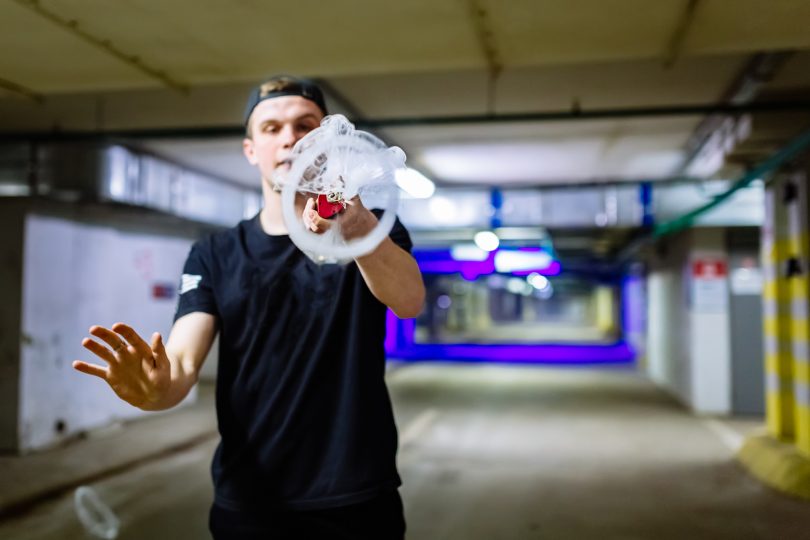 Over 9 million adults regularly vape. But it’s not just the act of vaping that’s becoming hot, it’s the general vape culture as well.

One subset of the culture that many people want to get into, but aren’t sure how, is vape tricks. Anyone can vape, but not everyone can blow Os and create tornados with their mouth (get your head out of the gutter, here).

If you’re a beginner vaper, or at least a beginner vape trickster, it’s confusing on how to get on that train. The good news is that we’ve compiled this easy to follow guide on how to start doing smoke tricks. You’ll move from beginner to expert in no time.

For a beginner’s guide, it makes sense to start off with some of the easiest tricks out there.

But just because this is one of the easiest vape tricks doesn’t mean it isn’t also one of the coolest ones. The dragon will make you look like, well, a dragon. Smoke billows out both your nose and the corners of your mouth, which will give the illusion that you’re a vape master.

What people don’t need to know is how easy this trick is. Begin by taking a deep, long drag from your vape or e-cig of choice. Then, all you have to do is exhale out of both your nose and your mouth.

The key here is to keep the middle of your lips clasped shut so the vapor can only escape out of the corners.

And that’s the whole trick! Get ready to look and feel like the coolest vaper at the party (which, let’s face it, isn’t too difficult at times).

This is another trick that looks expert-level but is actually perfect for beginners. You’ll need a prop for this trick: a bottle or glass with a bit of frozen water at the bottom.

All you have to do is take a nice drag from your favorite vape or e-cig and gently exhale it into the bottle or glass you prepared. The frozen water at the bottom will essentially make the vapor a little bit heavier than usual, which will allow you to pour it out of the glass like a waterfall as though it’s a potion and you’re a medieval medicine man.

Here’s another one that requires a prop: you’ll need a bubble wand and some soapy water. Take a drag from your vape, and blow it out while simultaneously blowing a bubble.

The vapor will be transported inside the bubble which will create, well, a vapor bubble if you can believe it. When the bubble pops, a mist of vapor will be released, and you’ll feel like the coolest vaper on the planet.

Now we’re getting into the good stuff. Any smoker will tell you that blowing Os, aka smoke rings, is one of the coolest tricks you can do. They’ll make you seem like an expert smoker, even though they’re somewhat easy to master.

Unlike the tricks we’ve gone over so far, smoke rings will take practice to get right. As with most tricks, start by taking a nice long drag. Instead of immediately exhaling, you’ll want to try and keep the vapor in your throat.

Next, purse your lips into an “O” shape. You’ll feel like an idiot, but this is the key to the trick. The “O” has to be exaggerated and tight, so don’t hold back.

To make the smoke ring, you then push the vapor up from your throat and out the “O” of your lips in one quick burst. Chances are your first attempts will just create puffs instead of Os.

Don’t give up, though, as this trick is not only cool, but it’s also a necessary step to learning more complicated tricks later.

Let’s take a step back from the slightly more difficult Os to a trick on the level of the dragon. The tornado trick will let you create little cyclones to give the illusion that you’re a vape wizard.

Take your drag and gently exhale it onto a flat surface like a table or a desk. This will create a small pool of vapor. To make this into a tornado, you want to quickly cup your hand and flick it upward over the pool of vapor.

This movement will spiral the vapor into a spiral that looks a lot like a tornado. It can take some practice to get the wrist movement right, but for a vape trick, it’s pretty simple.

You’ve definitely seen this trick done before: someone pushes the vapor out of their mouth for a split second before inhaling it back in.

The details of this trick don’t go much deeper than that, either. You take your drag, push it out of your mouth, and then quickly inhale it back in through your mouth.

You can make this trick a little fancier by doing what’s called a french inhale, which is a variation of the ghost inhale. Instead of inhaling the vapor back in with your mouth, you let the vapor flow out of your mouth as you inhale it up through your nostrils.

All tricksters have to start somewhere. These beginner tricks will get you on the track to becoming an expert in vape tricks in no time.

There’s no reason why beginners can do awesome tricks, either, as evidenced by these sick tricks you can learn with little to no experience doing tricks.

Something else you need to think about when learning tricks is having the best equipment at your disposable. Check out our starter kits and reviews of vape products so you know you’ve got the best stuff to do the best tricks.