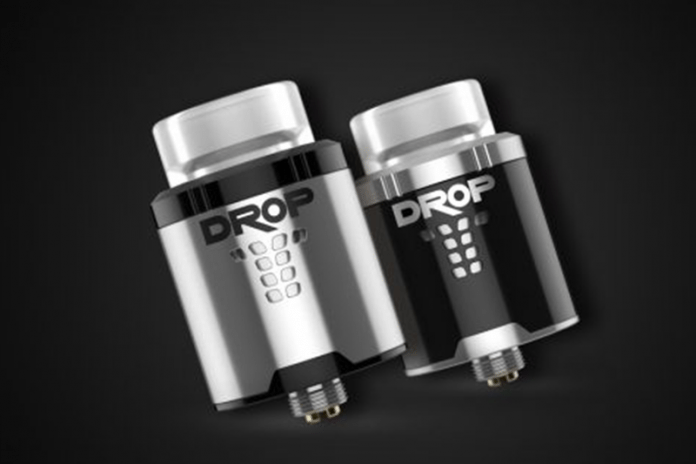 As much as I hate to admit it: I love this RDA more than any non-rebuild vape tank I’ve ever purchased. It has a great amount of airflow; the flavor is wonderful and it’s not harsh on your throat like some other RDA’s I’ve used in the past.

I think the airflow is so profound because it’s a four-post build deck, which you don’t find a lot; it also has horizontal multi-air slots in T-Shape design, which is super badass. Usually, you just have a few holes around the RDA, but The Vapor Chronicles outdid themselves with the creativity of the “T” design.

I’m not 100% positive it’s the “T” design in the DigiFlavor that makes the airflow so awesome, but I like to think it is. Another plus of the airflow created by the “T” is the clouds—I can’t begin to explain how fantastic these clouds are!

I guess I’d just say if there were ever a vape competition and they were trying to find the best cloud-making RDA, I would volunteer myself to show off the DigiFlavor x The Vapor Chronicles Drop 24mm RDA—the clouds are that amazing!

In the past, I’ve tried some of my friends RDA’s and when the RDA’s produced big clouds, the vape juice flavor was almost nonexistent.

This is another reason I love the Drop 24mm RDA—the flavor of the juice is spot on, it’s like nothing I’ve ever tried before. I haven’t used a ton of RDA’s, but I have used many regular old vape tanks and the difference in flavor is shocking. Usually, if I were to vape on a juice longer than two weeks, I wouldn’t be able to taste it anymore. However, this is not the case with the Drop.

I can be vaping on, Dino Bites, my favorite juice (it’s a combination of captain crunch, fruity pebbles, some sort of milk and just basically deliciousness) with the Drop RDA, and I don’t have to switch my juice for a week to be able to taste the deliciousness of Dino Bites. I can just keep vaping it without it losing flavor! Because the DigiFlavor x The Vapor Chronicles Drop doesn’t lose flavor, I don’t know if I’ll be purchasing any other RDA anytime soon!

I’ve already described how perfect the Drop is, but I have to add how it doesn’t hurt your throat. I don’t know if you have ever switched tanks/RDAs and you’ve almost gotten sick because the airflow was too strong?

If you don’t know what I’m talking about just know that if you want to prevent the feeling of sickness, get the DigiFlavor x The Vapor Chronicles Drop.

It sucks when you’re super stoked to try out a new RDA/Vape Tank, and then a few days in: you feel sick to the point you don’t even want to vape. I’m no doctor or vape expert but this hasn’t just happened to me. I’ve had three or four friends if I remember correctly who have had the same experience! It’s insane but as I said, if you want to prevent it, go with the Drop.

The only bad experience I’ve had with the DigiFlavor x The Vapor Chronicles Drop 24mm RDA is that I had to wait a few days for it in the mail. I can’t believe I’ve waited this long to try an RDA.

I’m not going to lie: learning how to rebuild the coil was pretty challenging, but it was worth it because the positives heavily outweigh this little negative.

Don’t look any further: the perfect RDA is here!