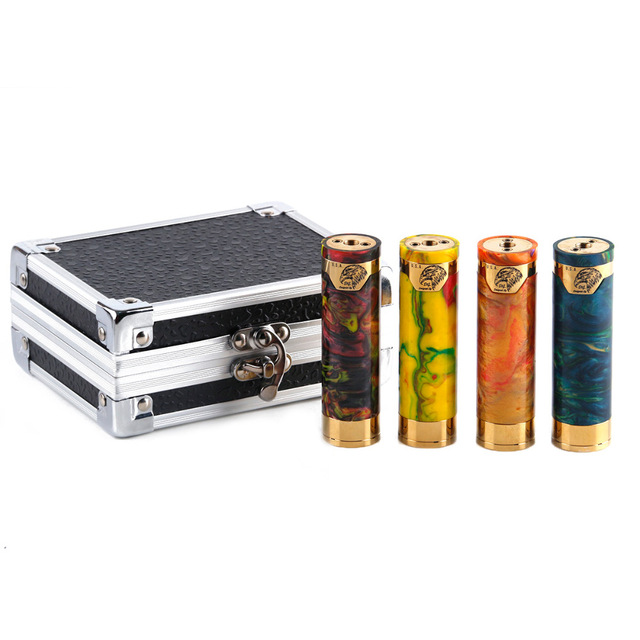 After vaping for a few months, I knew I was ready to move into an advanced form of vaping. I decided to invest in a mech mod because I knew that it would have the features that I was wanted. I decided to buy a Smokjoy Honor Resin Mech Mod. Below are some of the pros and cons I found about this particular mod.

I wanted to have a mod that would stand out from the crowd and the Honor Mod fit the bill. It’s made with a resin exterior that’s unique to each mod. To ensure that uniqueness, each mod has a serial number. The kit has resin on both the mod and the fire button and includes a matching resin drip tip. It’s available in a variety of colors too.

The Smokjoy Honor is Easy to Use

I have found that some vape pens are difficult to use because they require so much strength to depress the fire button. The Honor mod doesn’t have this problem; it’s easy to press because it is spring loaded.

While the Honor mod doesn’t have a lock on the fire button, it doesn’t fire on its own. The fire button is recessed so that it only fires when you press it intentionally. This cuts down on the likelihood of the mod firing while it is being carried in a pocket or purse.

The Honor mod has no circuitry inside, meaning that it can’t short circuit. The materials are long-lasting, and the upkeep is minimal to the mod. If the mod becomes wet, you can simply allow it to dry out and then use it the same way you would as if it had never gotten wet at all. The parts are easy to take apart and finding replacements when needed is not difficult at all.

Does Have Some Negatives

Also, I found that the mod goes through batteries extremely quickly, which is a bit annoying when I was out and about, and the batteries died. It’s not overly expensive though as I paid less than $40 for my Honor mod and I feel it was worth the investment.

I found that the mech mod works very well. I like that the strength isn’t regulated and that I can get a full pull when I vape. I also like the fact that it’s easy to use and I don’t have to do a lot of work to maintain it.

It’s not hard to fill, and the vape tank is large enough to hold plenty of vape juice to get me through the day without having to refill it. I’m glad I waited to get the mod until I had already used another vape so that my lungs were ready for that intense pull the Honor mod makes.