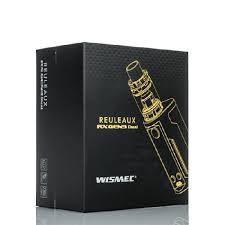 I give it two thumbs up and 5 stars

I started smoking cigarettes when I was very young. I wanted to fit in with the cool kids but as the years went by, I was trying medicine, hypnosis, different diets, and more to try and quit smoking cigarettes.

Nothing seemed to work which was super crappy and I thought I was just going to be a smoker for life, until recently. I haven’t had a cigarette in a few months thanks to the Wismec Reuleaux RX GEN3 Dual 230W Starter Kit. It has seriously saved my life because nothing else helped me stop smoking.

After about a week of vaping on the Reuleaux, I was able to put the smokes down for good. It’s insane to me that I smoked for as long as I did, and I wish I would have started vaping earlier, but I’m just stoked I started in the first place.

I was the type of person to always make fun of vapers; I didn’t understand why you would just want to tease yourself with a little bit of nicotine when you could just have a full cigarette. However, I understand now that vaping is just all around better and get why others haven’t gone back to smoking.

My first day of vaping was great, aside than the fact I coughed after my first few hits. I guess the Wismec Reuleaux RX is just a bit powerful for beginners, but I ended up getting used to it. The guy at the vape shop did warn me on how powerful the airflow was on this box mod was pretty powerful, but I was stubborn and thought I would be able to handle it.

That guy at the shop ended up laughing at me after I took my first hit because I coughed so hard. Despite the coughing, the flavor of my vape juice tastes exactly like blueberry pancakes—it’s insane and I loved it.

I used a friend’s vape pen a few years back and he told me it was vanilla ice cream, but I honestly couldn’t tell what the flavor was or if it was supposed to taste like anything, so I was shocked I could actually taste the pancakes when I hit my Wismec Reuleaux RX GEN3.

Turn It Up To 80 Watts Please

I’ve gotten pretty used to vaping now and I love how I can adjust the wattage on this mod because after a while I was craving a bigger cloud.

I started at only 40 watts and have now moved up to 80. Some days I go a little higher, while other days I go a bit lower, but the power is perfect on 80 even though the Wismec Reuleaux RX GEN3 goes all the way up to 230 watts! I don’t know who could vape that high but the idea of vaping at 230 watts is pretty cool to me.

There is really nothing bad I can say about this mod. It’s a great set up although I would recommend something less intense for first time vapers like myself.

It holds battery life and it fits perfectly in your hand. It isn’t too heavy which I like because now that I have other friends who vape I have held a few pretty heavy mods which makes me even more grateful to own the Wismec Reuleaux RX GEN3 Dual 230W Starter Kit.