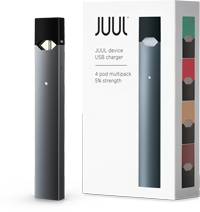 In August of 2018, around 10 million Americans admitted that they use e-cigarettes. And while these cigarette replacements are popular all across the board, nothing on the e-cigarette or vaping market has even come close to touching the powerhouse that is the Juul vape pen.

While Juul has come under fire in recent months, people alleging that they’re marketing their ads for children, that hasn’t stopped the e-cig company from topping the charts for most popular vape pen in the world.

But why are Juuls so popular? What makes this specific brand of vape pen so much better than all the others? We’ll break it down here for you so you can make the best decision for your vape purchase.

To break it down for you, Juul is an e-cig vaporizer that was designed with smokers in mind. It was initially invented to help people wean off of traditional cigarettes, but over time it has grown into a great cigarette replacement.

It’s a small, USB drive sized device that contains a battery, a temperature regulator, and a battery reader. Unlike many other mods, the Juul doesn’t contain an atomizer, instead, the Juulpods do.

The juice that gives the Juul its flavor and nicotine is a special kind of e-juice. Instead of liquid nicotine, it contains nicotine salt. This is a closer component to what is found in an actual tobacco leaf.

There are a number of things that make Juul different from other brands of e-cigs and vapes. And these differences are what make them so popular.

First, let’s take a look at what the Juul actually looks like. It’s a small, sleek, device that looks a lot like a USB drive. It’s compact and can fit in the palm of your hand.

This is nice for a lot of reasons. Primarily, people prefer Juul to other vape devices because it’s easier to hide. There’s no problem with tucking it into your pocket or slipping it into your sleeve if you get caught taking a puff at an inopportune time.

They’re also trendy. They come with colorful lights too, also known as “party mode.” If you wave your Juul around, you’ll get a fun little light show.

The Flavor Variety is Insane

When it comes to traditional cigarettes, you’ve got two flavors: regular and menthol.

But Juuls changed the game entirely. Juul created 8 flavors to make vaping more accessible to those who may not like the taste of traditional tobacco.

Here are some fun flavors you can get for your Juul:

However, if these fruity flavors don’t appeal to you, you can always stick with plain old tobacco or menthol!

The Juul company itself doesn’t recommend you attempt to refill their Juulpods with the e-juice you can buy for other vape mods.

However, it can be done. And the e-juice that you can buy from other manufacturers are almost limitless.

You can get flavors like the ones listed above, but you could also spring for things like chocolate and tangerine!

This is one of those topics that have a lot of debate surrounding it. There are people who swear that smoking e-cigarettes is just as bad as smoking a regular cigarette, but is that true?

Spoiler alert: it’s not. In fact, Juul vape pens wouldn’t be nearly as popular as they are without solid evidence that they’re safer than regular cigarettes.

Let’s take a look at what regular cigarette smoke contains. It’s made up of 70 carcinogens and carbon monoxide. It’s loaded with heavy metals like cadmium and arsenic, too.

But Juul spent time and money doing loads of research in an attempt to create an e-liquid that has the least amount of negative health impact while providing a top-notch product.

These ingredients are mostly harmless to inhale. In fact, glycerol and propylene glycol are usually used in vaporization liquids and even things like toothpaste.

Another reason why Juuls are so popular is that they’re downright easy to use.

Take a look at a high-end vaping setup.

For most vape mods, you’ll need a tank, a coil, and a few other odds and ends. A basic starter kit can run you as much as $60 in some places.

While many people do attempt to quit smoking traditional cigarettes for health reasons, many people also try to kick the habit in an attempt to lighten the load on their pocketbooks.

A Juul starter pack typically runs $35. Then you have to buy the Juulpods, and they can come in packs of four for $16.

Now, it’s worth mentioning that a Juulpod only lasts about a day if you’re a heavy vaper. There are subscription services out there that can help you save some money on packs of the pods, but you’ll save the most money if you can control your vaping.

Why Are Juuls so Popular?

So, why are Juuls so popular? It should be obvious by now that they’re the obvious choice for young adults who want to vape in peace without breaking the bank or lugging around a huge vape mod. They come in great flavors and the cartridge is small enough to hide just about anywhere.

If you love vaping and want to learn more about different mods, read our review series today!