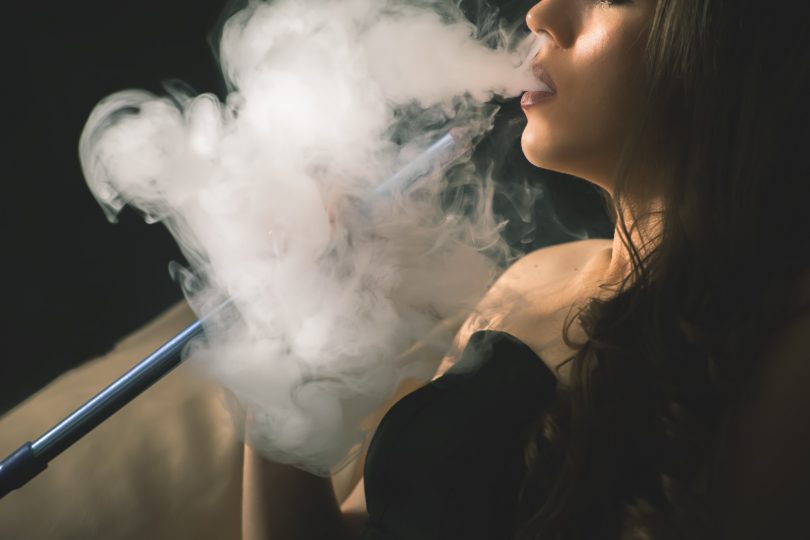 With celebrities Lady Gaga, Johnny Depp, Rhianna, Katy Perry, Leo DiCaprio, and Sarah Silverman puffin’ on the pen, while Dave Chapelle is lovin’ on the hookah, and Drake and Miley have a thing for both, it’s clear vape juice and shisha have made it into the hearts of many as a chill and social pastime.

But what’s the difference between these two beloved puffs? And how do you know which one’s for you?

To help get you to that chill place fast, we’ve put together some hookah vs vape basics. Take a look and then try out some smokes for yourself.

The hookah and vape devices both involve heating up a liquid to create a vapor that is inhaled and exhaled and almost always contains nicotine.

A hookah is a water pipe that uses coals to heat up wet tobacco and create vapor that you can smoke. Unlike traditional cigarettes, it doesn’t burn the tobacco, hence the vapor rather than smoke. Still, using the hookah is called “smoking.”

The tobacco typically used today goes by the name shisha. It’s not prepared the same as the tobacco used in regular cigarettes, but it still derives from tobacco leaves. The hookah pipe isn’t built to use tobacco combustion like cigarettes, though sometimes it happens if not done properly.

The pipe looks as ancient as it is, dating back thousands of years, with a tall head and body, the bowl for the water and moistened tobacco, and multiple hoses with mouthpieces that bring you the tobacco vapor. Often, hookah is done in groups with individual mouthpieces, or one passed between users.

Vaping heats a flavored liquid with a battery-powered electronic heating coil, typically in a small cigarette-shaped device called an e-cigarette or vape pen, and the liquid turns to vapor.

The liquid, and hence the vapor, typically contains nicotine. It does not use tobacco at all, unless for flavoring.

To get technical, the battery-powered heaters are called atomizers. That’s where the coil sits, and it has organic cotton inside. The cotton soaks up the e-liquid that then becomes vape.

The Juice and the Shisha

Hookahs use tobacco-based “shisha” and vaping uses “e-liquid.” Both contain nicotine, although nicotine-free options are available. Both contain vegetable glycerin (VG), and both come in a variety of flavors.

Hookah vs Vape Flavors and Feel

Both hookah and vape let you combine flavors. Most use classic fruit flavors like strawberry, cherry, mango, apple, and watermelon. And now they’re getting creative with flavors like mint, licorice, and chocolate and blends like cappuccino, creamy orange, and soda.

The experience physically? Both give you that nicotine buzz.

As for the vapor, it seems to be personal. Some say both hookah and vape-juice vapor feel smooth, while others prefer the vape inhale to what they consider the “harsher” hookah.

Others say the hookah gives a more full-bodied vapor experience. Most find both to be smoother than regular tobacco smokes.

The first hookahs date back a few thousand years to north-west India. Made of coconut shells and a tube and mouthpiece, these primitive pipes were used to smoke opium and hashish.

The hookah moved west to Persia, where it got a bump up in design and was used with tobacco. It became part of entertaining in the home.

Then, the hookah saw a revival in Turkey 500 years ago, with gorgeous and elegant new designs and use by the wealthy and intellectual circles.

While vaping is a direct descendant of the hookah, in that they’re both about inhaling nicotine vapor, the modern vape started when Herbert A. Gilbert patented the first vapor cigarette in 1967 and vaporized flavored air.

A Chinese pharmacist named Hon Lik gets credit for making the first current-style e-cigarette circa 2003. He electronically vaporized a nicotine-and-propylene-glycol-based liquid blend.

The goal was a safer way to inhale nicotine. It hit the Chinese market in 2004 and, based on its success there, made it to the United States in 2007.

To Inhale or Not to Inhale

Both hookah and vaping provide a way to enjoy nicotine without the tobacco smoke of cigarettes, with the tar and chemicals it contains. Sometimes, if not done properly, there is combustion of the tobacco in the hookah. This isn’t an issue with vaping since there is no tobacco in vape juice and devices, just the liquid nicotine.

Hookahs are usually used in more social scenarios, while vape devices, since small and portable, are often used to help people quit smoking.

The hookah is mostly a social experience. You can smoke alone, but most tend to go to a hookah bar with others or to meet others and socialize. You can have a hookah at home too, of course, and invite friends.

The hookah requires some setup, and some people like the ritual of taking care of the hookah pipe.

Vaping also lends itself to ritual but more in the sense of being part of a daily routine like smoking cigarettes. Vaping tends to be a more solitary smoke since you can grab your device or e-cigs and take them with you. You don’t have to be in a spot where you can set up a pipe. Plus, they’re easy to attain.

Same But Different So Decide for Yourself

In the vape vs hookah discussion, the experience of inhaling and exhaling flavored vapor is similar. It’s the how and the lifestyle that are different.

Have you tried both? What do you think about hookah vs vape?

If you’re new, we suggest giving them both a whirl. Vape juice is easier to start with. Check out this post about how to use a vape pen and then go for it.